Error VIDEO_TDR_FAILURE Windows 10 – How To Solve It 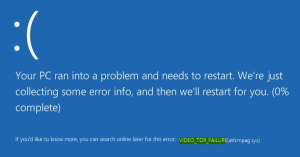 One of the frequent blue screens of death (BSOD) on a computer or laptop with Windows 10 is the VIDEO_TDR_FAILURE error.

After which the failed module is usually indicated, most often atikmpag.sys, nvlddmkm.sys or igdkmd64.sys, but other options are possible.

This tutorial details how to fix the VIDEO_TDR_FAILURE error in Windows 10 and about the possible causes of a blue screen with this error.

Also, in the end, there is a video guide, where the approaches to the correction are shown clearly.

How to fix the VIDEO_TDR_FAILURE error

In general, if you ignore a number of nuances, which will be discussed in detail later in the article, the correction of the VIDEO_TDR_FAILURE error comes down to the following points:

And now more in detail on all these points and on various methods to correct the considered error.


Almost always the appearance of the blue screen VIDEO_TDR_FAILURE is associated with certain aspects of the video card.

More often – problems with drivers or software (if programs and games are incorrectly accessed to the functions of a video card), less often – with some nuances of the operation of the video card itself (hardware), its temperature, or excessive load.

TDR = Timeout, Detection, and Recovery, and an error occurs if the video card stops responding.

At the same time, by the name of the failed file, the error message can be used to conclude which video card is involved.

Ways to fix the error should start with an update or rollback of video card drivers, and perhaps this will help (especially if the error began to appear after a recent update).

Important: Some users mistakenly believe that if you click “Update driver” in the device manager, automatically search for updated drivers and get the message that “The most suitable drivers for this device are already installed,” this means that the latest driver is worth.

In fact, this is not the case (the message only says that Windows Update cannot offer you another driver).

To update the driver, the correct way will be to download the drivers for your video card from the official site (NVIDIA, AMD, Intel) and manually install it on your computer.

If this did not work, try to remove the old driver first; the method is the same for other video cards.

If the VIDEO_TDR_FAILURE error occurs on a laptop with Windows 10, this way can help (it happens that the proprietary drivers from the manufacturer, especially on laptops, have their own characteristics):

If the problem, on the contrary, appeared after updating the drivers, try to roll back the driver, to do this, follow these steps:

Some other methods to correct the problem are also described below.