How To Fix Error Code 907 in Google Play [Quick Fix] 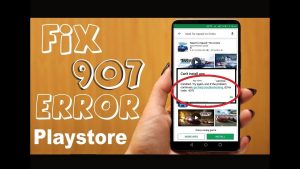 With the advent of the new versions of the Android operating system, new errors began to appear that arise in the process of using the Market.

Despite their number and frequency of appearance, most have already found solutions to not indifferent users.

This fate has not bypassed the error code 907 of the Google Play – even a novice user can solve it without resorting to the help of service centers.

There is two news about this issue. Bad – there are a lot of reasons for it, so you have to search for what’s on your system.

Good – regardless of the found reason, in most cases, the user will not need specific knowledge and additional software.

1 Causes of an Error

2 Possible solutions to the problem

2.4 Roll back and reinstall the firmware

Possible solutions to the problem android error 907 in Google Play 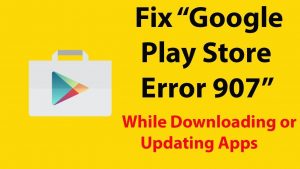 Once Google Play refuses to cooperate with you, go to the “Parameters” of the device, scroll down to the “Applications” item, and find the following entries inside it.

“Google Play,” “Google Play Services” and “Google Services Framework.” In each of them, in turn, it is necessary to clear the outdated cache and local data using the buttons “Delete cache” and “Delete data,” respectively.

After the performed manipulations, it is strongly recommended to restart the phone.

After switching it on, ask Markettack if it can download the necessary application. If Market says, it can try to avoid its updates until new, more stable versions are released, in which the error will be corrected.

If you have a working version of the Market that was previously made using, for example, Titanium Backup, you can restore it (and not update it).

The reason may also lie in the version of the Google Play itself. Option two – either it is too new, or it is not new enough.

Turning off the memory card

If none of the above has helped, then it is worth referring to the data of the problem application, which does not want to be updated.

If its data is not on the system partitions, but on external storage, then go to the settings of this application, as described in the previous paragraph.

There, find and click on the “Transfer to internal memory” button.

In the phone settings, find the item “Memory,” at the bottom of which is the “Disconnect External Drive ” button.

This command will unmount the memory card from the system, and applications will be installed on the phone itself.

As one of the options – physical removal of the media after turning off the phone. If the problem does not appear without it.E

either exchange the card under warranty or, having saved important data, format it. Try using a different map on which this error never appeared before.

Roll back and reinstall the firmware

If the 907 error began to appear after the next update of the operating system itself, try to roll back to the previous version.

This can be done with the built-in firmware (if it supports and provides such an opportunity) or you have to search for a backup that was made before the error, for example, using advanced recovery (menu “Restore” in the section “Wipe”).

If this helped fix the problem, do not be lazy to send a bug report to the developer or localizer of the operating system.

Perhaps this is what will affect the operational solution of the problem in the next update.

If you make a copy of the current version of the system, you can try to reset it to the factory settings and look at the behavior of the Google Play under these conditions.

If these items did not help, you would have to search for a new operating system and flash your smartphone with it.

Be sure to review the comments and feedback about it to find exactly what you need for work or entertainment. If Error 907 starts to appear again after updating Market to the current version.

You will have to reset it to the initial one and still wait for the release of the corrected version.

Do not rush to carry your e-pet to the service center – after carefully reading the instructions, you will be able to resolve this problem on your own in the Play Store.

How To Fix System Thread Exception Not Handled Error

10 Useful Windows Commands That Everyone Should Know

How To Fix The  Wow-64.exe Application Error Easily

How to Fix Error CE-30005-8 Cannot Start the Application