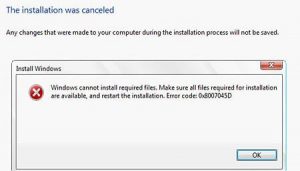 However, most of them can be corrected, if a little to understand the causes of their occurrence and how to eliminate them.

Most often, they are corrected by applying a small expenditure of effort.

It occurs when installing operating systems of different generations – 7, 8, 10.

The most common cause of occurrence is physical damage to the hard disk. But there are other reasons.

What are the types of errors?

Besides the fact that such code in most cases indicates an error during the installation of the operating system, it can manifest itself when some other problems occur.

Why does it appear?

One of the possible causes of a permanent error 0x8007045d when installing Windows – HDD (hard disk) of the computer is damaged. Remember, didn’t the system unit of a computer or laptop survived hard shocks, drops? Did he shake? Did you understand the computer lately?

Even if the answer to all questions is negative, the possibility of breakdown cannot be ruled out. Error code 0x8007045d often makes itself felt and other failures:

Most often, 0x8007045d when copying a file manifests itself when a device is malfunctioning, from which information is read (flash drive) or the device to which it is written (hard disk). Are you sure your USB flash drive is working?

Try to use it with another computer. Error 0x8007045d when copying to a USB flash drive means that it needs repair, or the malfunction is too serious. Try searching on the Internet for a branded utility for recovering flash drives from Transcend.

If the problem persists, then your hard drive may be to blame. Error 0x8007045d is quite tricky. And can not “tell” you what is wrong.

During the installation of Windows

Error 0x8007045d is most common when installing Windows when there are any problems with the HDD or SSD.

This signals a physical failure. There may be two options: a faulty installation disk or USB drive, or a problem with the hard drive of the computer itself.

The most frequent case: physical damage to the hard disk, in which everything is fixed solely by replacing this component.

Of course, there may be a malfunction of the carrier itself, but the easiest way to eliminate it is to simply insert it into another computer and try to start it.

With an incorrectly functioning hard drive, everything is more complicated.

In this case, during installation, the creation of partitions for the operating system passes without failures, as well as the formatting of disks.

But when the installation starts directly, an interruption occurs with the error code displayed.

First of all, if such a problem occurs, the hard drive and the operating system media should be checked for malfunction.

One of the most common occurrences of the 0x8007045d error is during the installation of the Windows operating system. Unfortunately, in this case, the error is quite difficult to fix, nevertheless possible. However, you will have to tinker a bit.

So, you must have completely formatted your system partition during the installation process of the new Windows OS, which, in fact, almost all of us do. This means that you left your car without a working system.

That is why you will have to try to fix the error 0x8007045d using the Windows Recovery Environment (Windows RE), which can be accessed right through the installation media you prepared in advance. It is clear that you have already set the BIOS / UEFI boot priority on the drive / USB, so let’s skip this item. Boot through the installation disk and get to the familiar screen with the “Install” button.

To get to the Windows recovery environment, you need to click on the “System Restore” button. You will then see a screen with a choice of action – select the “Troubleshooting” section. At this point, there is nothing to return, so click on the “Advanced Settings” subsection and select the “Command Line” tool.

So, as we said at the very beginning, the error 0x8007045d is often a sign that the hard disk is experiencing some problems. Often, these problems are bad sectors and damage to the disk file system. CHKDSK can help you troubleshoot these problems. Before we use it, you need to find out under which letter your system partition is represented.

How to fix the error

To effectively eliminate this error during the installation of Windows 7, 8, 10 or other versions, you need to follow a certain algorithm.

By sticking with it, you can safely deal with a similar problem yourself, without attracting professionals.

At a minimum, the user will be able to test problems with the HDD independently, and if it is impossible to correct them on their own, contact a specialist for advice.

First of all, you need to insert into your computer media that contains the operating system.

Then you need to restart the computer and enter the BIOS. In the Boot menu, you need to find the media and specify it as a boot. After that, the installation should normally begin.

The installer window should open. Do not click on the Install button.

You must find the inconspicuous inscription “System Restore” and run it.

The result will be the launch of testing the section that the user specified.

If there are faults that adversely affect the installation of the operating system Windows 7, 8, 10 or another, the system will try to fix them.

This can lead to a return to HDD in working condition.

The last place in which the error 0x8007045d can appear is when copying or moving files from the SD media installed in the system through the card reader. Immediately you need to say – the problem is most likely in the memory card or in the card reader.

Check whether your SD card will work correctly on another device. If everything works as it should, for example, the files are quietly copied or moved – try using another card reader, as it may not work perfectly and the error 0x8007045d was caused by it.

In some cases, an error such as 0x8007025d may occur. She says that an error occurred during the copying of files so that all changes will be canceled.

It is connected with the fact that the update files are written incorrectly on the hard disk of the computer.

Most often, the installer does not have enough disk space, but other reasons are possible.

Make sure your PC has enough free space for the specific OS version.

If there is enough free space, then try the following actions:

Another possible cause of the error is corrupted files on the installation disk.

Try to overwrite the installer again, using stable versions of the recommended software, re-download them from the official sites of developers.

Let’s move on to another case. Error 0x8007045d, as already mentioned, can also manifest itself when moving / copying / archiving files in Windows. If you encounter such a problem, then you should know that the reason for this is also in your hard disk, which has experienced obvious malfunctions, such as file system corruption, bad sectors.

To fix the error 0x8007045d in this case, you also need to try to repair it using the system utility CHKDSK. Considering that everything is all right with your operating system, and you can easily access it – you can use the graphical interface of this utility.

Open a system window with partitions, right-click on a system partition, for example, a section under the letter C, and select “Properties.” Next, go to the “Service” tab and click on the “Check” button, located in the “Check for errors” section.

After pressing the button, scanning of your hard disk will begin. Follow the instructions on the screen if the utility finds any problems with the disk.

After the program finishes, try again to move or copy what you originally wanted to check for error 0x8007045d. Probably, you managed to get rid of the error, if not – try using the Victoria HDD utility, which we have already advised in the previous paragraph of the article, to check to make a thorough check of the hard disk and restore it if possible.

How to correct the error, if the reason is lack of space

First of all, you need to clean the disk where the current operating system is installed.

This is done using automatic cleaning. To run it, you need to perform the following steps:

After performing these steps to save memory after installing the operating system (10, 8 or any other Windows).

You can remove unnecessary system languages that are not used in the computer. For this you need:

In the case when an update occurs on Windows 10, it is better to double-check – isn’t the update package already downloaded?

Most often it is stored on the “C: /” disk. If it is downloaded, it is better to remove it and install the update again, in order to avoid errors. It can be stored in the following directories:

It is best to double-check and clean them if necessary. After that, the computer should be restarted.

And you can start installing the Windows 10 operating system again.

Now you know more about how to eliminate 0x8007045d when installing Windows 7, 8, and 10. But there is no universal way to deal with the problem. Does your computer break down often? It is necessary to clearly understand when it is better to take it to a specialist.

Are you trying to solve the problem yourself? Fine! The main thing – do not overdo it. Study the best materials on the topic on the Internet, and only then, if nothing helps, feel free to give the PC to an experienced master!

How To Fix Instup.exe Avast Application Error In Windows 10 [Solved]