How To Fix Reached End Of File While Parsing Java 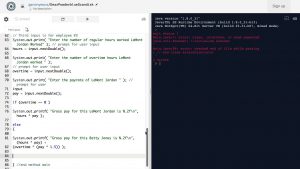 This is a common java compile error and by compile error I mean any type of error that prevent the compiler to translate adequately a java program.

Into its corresponding computer readable machine code that can be executed correctly.

Generally caused by incorrect syntaxes, a class not found, a bad class name or a bad method name and so on.  Analyzing the statement of the error message.

What the compiler meant by the word ‘parsing’ is that, during the process of syntactic analysis of the java program. A useful tool here would be a log parser, like this one that can be found here

In other words, the compiler is trying to say that it has reached the end of file without any evidence that the file has ended.

The file in this context does not in all cases mean a large java program, it could be just a block of java code but with a bad syntactic composition somewhere.

Note that this error message could also occur in C programming, but am not going to be discussing about C programming here since the error occur mostly in java programming.

But it is worth knowing that this error occurs in C programming when you are reading a file into a memory buffer (i.e. a physical memory storage used to temporarily store data.

In the whole file or the size (in bytes) of the current read position to the end of the file. you will get this error or something related to it.

Follow me as I make a detailed explanation of the cause of this java error and the step by step approaches to take in order to fix the error.

Possible Causes of “Reached End of File while Parsing Error”

The general name for the cause of ‘reached end of file while parsing’ error is called Syntax Error.

In some occasions, another bad syntax that could cause end of file.

While parsing error is a bad naming convention in which the name given to your class is not the same as the name you used to save your file (which ought to be the same).

The names of your methods do not comply with the standard java naming conventions.

Possible Solutions to “Reached End of File while Parsing Error”

The major fix or solution to this error message is to append a closing or ending curly brace to a corresponding opened curly braces.

which I will describe how to figure it out in the guides on how to fix the error section. Another solution is to make sure your java program complies with the standard Java coding naming conventions.

And note that java is a case sensitive programming language, thus, apart from the name of your file and the name of the public class being the same, the case also should the same.

You can carefully go through your codes and figure out where you have opened a curly brace but failed to provide an ending brace for such opened brace.

However, this approach could be time consuming in case of large java programs, therefore, you can first add a curly brace at the end of your program to do a random check.

The later approach described is also inefficient in cases whereby the omitted brace is an open brace or maybe the problem is that you have mistakenly added a redundant opening or closing brace.

Therefore, the best approach is still to carefully read through the java program and figure out where there is or are mismatch in curly braces.

You can also quickly discover this error by counting the number of open braces in your program and determining whether it tally with the number of closing braces.

If you are using IDE’s like NetBeans and Eclipse, an easier way to diagnose where the error is in the code, is to use a combination of the key “Alt + Shift + F”.

This will cause the IDE to automatically indent the codes properly and align matching braces with their corresponding control structures which will make it easier for you to see where the missing brace is located.

For the other cause of the error i.e. incorrect class and method naming, it could be fixed by going through your program and using the standard java coding conventions where necessary.

A few of which include putting the open brace on the same line with the method or class declaration, naming your classes and methods.

Using camel case; a practice of writing phrases in which each word in the middle of the phrase begins with a capital letter with no intervening spaces or punctuation.

How to avoid “Reached End of File while Parsing Error”

This error can be avoided by using software called Integrated Development Environment (IDE) such as Eclipse and NetBeans to write your Java programs.

These softwares have inbuilt syntax checkers that can automatically inform you when a block of code does not have a closing brace.

Some of these IDE’s will even automatically append a closing brace to every brace you open just in a bit to avoid these reached end of file error.

Intelligent code editors like Visual Studio code and Sublime Text can also be used to write your java programs as they are also capable of uncovering errors in your programs before you attempt to compile them.

Another way to avoid the error caused by the error message “reached end of file while parsing error” is to adopt a clean coding structure.

By proper indentations and clear separation of individual classes and methods to make it easier for you to locate any unclosed brace.

For more fixes on common Java Errors, check out our articles below: