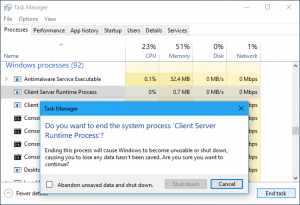 On a computer running Windows, open the Task Manager on the Details tab.

And you will definitely find one or more client/server runtime processes Client / Server Runtime Subsystem (csrss.exe) running on your PC.

This process is an integral part of Windows, starting with the version of Windows NT and is part of the user mode of the “Win32” subsystem.

This process is one of the critical, for Windows operation, system-forming processes, such as “svchost.exe,” “dwm.exe,” “ctfmon.exe,” “mDNSResponder.exe,” “rundll32.exe” and many others. Read on to find out what and how.

What is the “Client / Server Runtime Subsystem, CSRSS”? 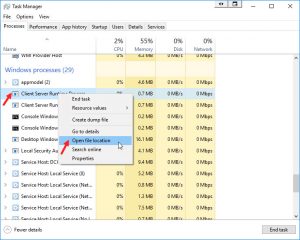 The “csrss.exe” process is an important part of the Windows operating system.


Prior to Windows NT 4.0, released in 1996, csrss.exe was responsible for the entire graphics subsystem.

Including window management, drawing elements on the screen, and other related operating system functions.

In Windows NT 4.0, many of these functions were transferred from the Client / Server Runtime Subsystem process, which runs as a normal process, to the main kernel of Windows.

However, the “csrss.exe” process is still responsible for handling the console in Win32 and the graphical interface for shutting down the OS, which is critical functions in Windows.

Prior to Windows 7, the “csrss.exe” process provided the start of a console window (Command Prompt).

In Windows 7 and all newer versions, the “Console Host” process (conhost.exe) took over this function.

At the same time, for starting the process “conhost.exe,” it is still responsible “csrss.exe.”

Can I turn it off?

This subsystem is one of the main, and is crucial for the normal functioning of Windows, so its completion will immediately lead to a malfunction of the OS.

And, as a result, the OS will terminate with an error, you will see a “blue screen of death” (BSOD) and the PC will reboot.

In any case, there is no reason to disable it – the process uses tiny resources and performs only some critical system functions.

If you log into Task Manager and try to terminate the “csrss.exe” process.

Windows will display a message that: “Terminating the system process may lead to unstable system operation.

” Ignore this warning, and you will see the message “Access Denied,” this is a secure process that you cannot complete.

Windows starts this process every time it boots up.

If “csrss.exe” could not be started, the operating system will crash and terminate with a blue screen of death (BSoD) with the error code “0xC000021A.”

Can “csrss.exe” be a virus?

It is absolutely normal for this process if one or several processes with this name will always run in the background on a PC under Windows OS.

The executable file “csrss.exe” is located in the directory “C: \ Windows \ system32” on the disk with the installed operating system.

Open “Task Manager” go to the “Details” tab, find “csrss.exe” and click on it with the right mouse button, in the opened menu select “Open file location.

” So you can make sure that the real executable file is responsible for this process and it lies in the standard directory ( % SYSTEMROOT% \ system32 ).

In the window «Explorer» the Windows, you should check whether the correct directory is “the C: \ the Windows \ the System32», and should it contain the file “csrss.exe».

It is known that viruses, spyware, and all sorts of trojans try to infect or disguise themselves as critical operating system processes.

Also, a lot of viruses use the name of this process or an executable file to mask, so as not to make you suspicious.

Especially, because a separate process is created for each session, so the number of such processes running simultaneously on the servers can reach several dozen.

The original executable “csrss.exe” file is stored only in the “% SYSTEMROOT% \ system32” directory.

It is almost impossible to replace or overwrite it in the standard directory if only one operating system is installed on the computer.

If you find files with the name “csrss.exe” in other directories on your PC, you can safely delete them.

Also, if this happens, you will need to perform a full scan of the entire PC with your favorite antivirus software.

If someone tells you that the file “csrss.exe” located in “C: \ Windows \ System32” is a virus, this is not true.

This is a real critical system file, and deleting it will cause the operating system to crash and, as a result, to reinstall it.

These processes work on every PC under Windows, and this is absolutely normal.

First, you need to check whether the system file CSRSS.EXE exactly causes the download, or whether it is virus software.

Sometimes, a CSRSS.EXE file can load the processor without being infected. The culprits of this are failures in application scenarios or incorrect hibernation.

The most popular solutions are discussed below:

How To Fix Msvcp140.dll Missing In Windows 10[Download Here]