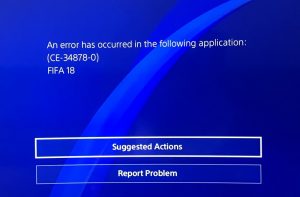 CE-34878-0 Error is a common and a general error encountered by gamers on PlayStation 4. This error is not an error that is specific to a particular video game, but rather, it can occur on any game as far as you are playing the game on PlayStation 4 console.

What does this CE-34878-0 error code actually mean? It simply means that the game you are playing is no more responding or has crashed.

And the effect of this is that you will have to relaunch the game and continue where you left off, if at all it will respond even after the restart. Such an incidence can be very frustrating especially when you have made a considerable progress in the game play.

Not to worry, I have got you covered. In this article I am going to walk you through things that are capable of causing this PS4 CE-34878-0 error. We also go through practical steps to fix the error when it occurs and discuss things to keep an eye on in order prevent subsequent occurrence of ce-34878-0 error on your PlayStation 4 console.

Two or more of the causes stated above could be the reason you are encountering ce-34878-0 error on your PlayStation, and thus call for the need for you to try most or all of the fixes that will be described below in order to fix the error. 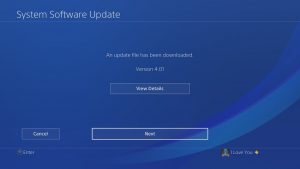 There is a need for your PS4 system software to have the most recent updates so as to ensure compatibility with the game software. In a case whereby the system software is outdated.

What is actually happening is that your system software does not have the necessary capabilities to bear the data provided by the game software, and so the game crashes and display the ce-34878-0 error code.

The same incompatibility issue that occur when your PS4 system software is not up to date with the game software you want play also occur if it is your game software that is outdated.

The steps to follow to update a game software on PS4 are as follows:

Peradventure you have upgraded the Hard Disk Drive in your PS4 system, the PlayStation support group suggest you re-install the original HDD that came with the PS4.

The HDD you upgraded to might not provide the necessary capabilities or might not be compatible with the PS4 system hardware. Rolling back to the original HDD has proved to be a solution to some gamers in solving the ce-34878-0 or error CE-34788-0 on PS4.

If the error persists even after the solutions described above, you can try to do an Initialization of the PS4 system. Initialization is a process which involves the formatting of sectors (bad) on the surface of a hard disk drive so that the operating system can access them.

And so the process of initialization can fix an issue whereby the PS4 system cannot fully access the files on the hard disk drive.

A cache is like a specialized RAM memory that is used to optimize data transfers between system elements and also serve a temporary storage of data.

The cache memory mostly consists of junk files and you can freely delete them to optimize the general functionality of your PlayStation 4 system.

There are other simple fixes that can be done to get rid of the ce-34878-0 error code. Some of which are:

We hope one of those solutions help with the error. Please check out other PS4 Error Codes and solutions here.