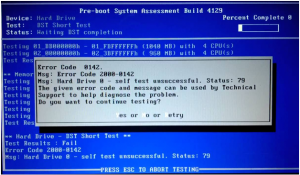 Sometimes, our laptops and computers can get us really frustrated. Most especially when our laptops or computer systems start to malfunctions and read all manner of errors. Take, for example, the error code 2000-0142.

Perhaps the reasons why this error code is showing on your computer’s screen, you have no idea.

Or this error could be as a result of CPU failure or corrupted memory. And to burst your bubbles, when this error code is displayed on your computer’s screen, it comes with a dire consequence.

This error code may sometimes be as bad as requiring you to change the entire hard disk of your computer or laptop.

I am pretty sure that if you have this error code on your computer screen right now, you are probably wondering what to do next.

Or you may be calculating where to source for money to get a new hard disk. But like I said, in some cases, it may require you to buy a new hard disk, so there are other minor fixes you can try out first.

There are like two (2) fixes you could try out, which I would be discussing in this article. But before we get into talks of how to fix the error 2000-0142, let us first determine the possible cause of the error in the first place.

Although most computers comes with a PSA – pre-start-up assessment, which you can use to diagnosis your computer.

How to access the PSA may vary on different laptops. But the PSA is an excellent tool that you can make use of to determining which part o your hardware component is malfunctioning.

For the error 2000-0142 error message on your computer screen, the following could be responsible:

Because there are different causes of the error 2000-0142, there cannot be one fix or solution that works for it all. You may get a new hard disk to fix this error, and the problem might not be the hard disk. Like I said earlier on, there are two (2) major fixes that would be discussed in this article. These two (2) fixes or possible solution to the error 2000-0142 works. Check them out.

Run the S.M.A.R.T Test on your Hard Disk

The S.M.A.R.T test stands for Self Monitoring, Analysis, and Reporting Technology Test. Most computer manufacturers provide a pre-boot diagnostic tool for users to take advantage of, for fixing software or hardware related failures.

For some computer, it may require that you press the “Esc” key as the computer is booting. For some computers, it is the F12 and some other computers the F1 key. Whatever the case may be, locate how to enter the BIOS setup utility to proceed with the S.M.A.R.T. test.

After successfully getting into the BIOS setup, select the affected hard disk then tap enter. Then select S.M.A.R.T and then tap enter again. Select any of the S.M.A.R.T test options which include Status Check, Short Test or Extended Self Test.

The built-in and online diagnostics can also be a fix you can try out to fix the error 2000-0142. To use this fix, restart your computer and enter the one-time boot menu by pressing the F12 repeatedly on your computer, the F12 works or Dell computers.

Follow the instructions on your computer screen to complete the Built-in diagnostic process.

Carry out the test, and if the test fails, write down the error code as well as the validation. Then go to your brand’s support site and enter the service tag you noted down. The error code and validation would be used for an online diagnostic.

After trying the above fixes by yourself and no luck then you may need to take the computer to a service shop for a proper check. There they would accurately diagnose the computer and figure out where the problem is and fix it. The only issue is that it would definitely cost you something, no matter how little.