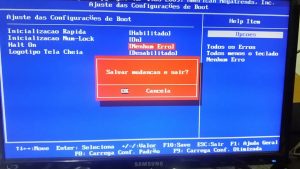 If you get this error when you boot your computer or laptop, then you have come to the right place!

Now we will quickly analyze the reasons and possible ways to eliminate the error ” CPU fan error press F1 ” by the pit.

Literally, this means the following: an error in the fan for the processor, press “F1”. That is, to continue booting the computer, simply press the “F1” button.

But the problem itself, because of which this error appeared, will not disappear.

In general, when you turn on the computer, its internal program polls all devices and checks their parameters.

When errors are detected, the corresponding messages are displayed. Some errors are critical, and further work is impossible, while others are not critical, as in our case.

That is, you can press the button and work further, but you need to be confident in your actions, because if the CPU cooler is not really spinning, the computer may overheat.

The processor fan is connected to a special socket on the motherboard, which is called “CPU Fan.” There are other connectors, such as “Chassis Fan” or “Power Fan,” which can be connected to the case or any other fans.

The BIOS of the computer determines the performance of the fan by the number of its turns, i.e., if the speed is “zero,” then the cooler is considered non-working, and an error message is displayed.

So, very often the processor fan is connected to the wrong connector, and the BIOS simply does not see it! To solve the problem, you just need to reconnect the wires to the correct connector, and that’s it!

It also happens that the cooler plug is three-pin, and the connector on the motherboard is four-pin.

You can connect them, and everything will spin, but the BIOS may not recognize the speed sensor and there will be the same error. This is rare, and usually, everything is fine.

But if this is your case, then there are two options: either pick up compatible equipment, or ignore the error (see below).

If everything is connected correctly and everything worked before, then it’s time to open the lid of the system unit and check if the processor fan is spinning.

Maybe the poor fellow has already become clogged with dust and is no longer spinning. Or wires have fallen into the blades, and they do not allow them to move.

You can try to clean the fan and radiator, but then you still need to go and choose a new cooling system.

As practice shows, cleaning helps very briefly, and if it reached the point that the cooler stopped spinning at all, then this is a bad thing.

At my house, there was such that everything was spinning and was connected correctly. The problem was in the very “CPU Fan” connector. He did not read the rotation sensor, just did not see it, or only occasionally.

I had no choice but to connect the fan to another connector on the motherboard. I still received the error “CPU fan error error” F1 “, but I could control the rotation speed on the other connector.

For such and similar cases, it remains only to turn off the error message.

How to ignore an error when booting the computer 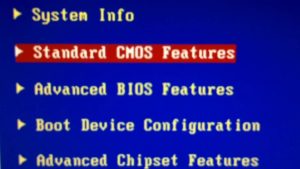 Fortunately, in almost all bios there is a function to disable the monitoring of the rotation speed of the CPU Fan.

Depending on the BIOS version, the option may be in different places, but it will be called approximately the same.

Go to the BIOS, and look for the tab “Power.”

To disable tracking, set the “CPU Fan Speed” option to “N / A” or “Disabled.” But now you have to make sure that the cooler works.

That is, periodically glancing whether it is spinning, or observing the number of its turns on another connector. Not superfluous from time to time to monitor the temperature of the processor.

It is convenient to monitor the computer settings with the help of a special program. In AIDA64, you can see the processor temperature and fan speed in the section “ Computer -> Sensors. ”

On my laptop does not show the rotation speed, but you can see all the temperatures. In general, the average speed of coolers is about 1500-2500 revolutions per minute (RPM).

It will not be superfluous to configure the thresholds for automatically shutting down the computer when overheating. This is also done in the BIOS.

Also, it is possible to completely disable waiting for pressing the “F1” button for any non-critical errors. To do this, use the “Wait For F1 if Error” option, which is enabled by default.

To disable, set to “Disabled.” In the new “bios” UEFI, this option is in the “Boot.”

We figured out why an error occurred when the computer “CPU fan error press F1” started up and what to do so that it does not repeat every time it is turned on.

According to statistics, the greatest number of problems due to an idle or slow fan. When it is barely spinning, the rotation sensor shows zero. Also, sometimes it is incorrectly connected.

With a completely non-working cooler, the processor most likely will not burn, but it will work very slowly, and there may be different errors in Windows if it boots at all.

How To Fix System Thread Exception Not Handled Error

10 Useful Windows Commands That Everyone Should Know

How To Fix The  Wow-64.exe Application Error Easily

How to Fix Error CE-30005-8 Cannot Start the Application