How To Fix Clock Watchdog Timeout Error In Windows 10 [FIXED] 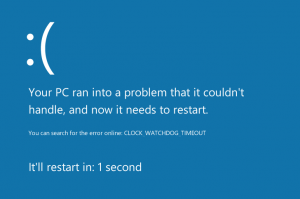 One of the most difficult in identifying the causes and correcting errors in Windows 10 is the blue screen “Your PC has a problem and needs to be restarted”.

And the error code CLOCK_WATCHDOG_TIMEOUT, which can appear both at arbitrary moments.

The error itself says that the system expected interrupt was not received from one of the processor cores in the expected time, which, as a rule, says little about what to do next.

This tutorial is about the most common causes of errors and ways to fix the clock watchdog timeout blue screen in Windows 10, if possible (in some cases the problem may be hardware).

I decided to make information about the error in relation to the owners of computers on the Ryzen in a separate section.

Because for them, in addition to the reasons described below, there are also their own specific ones.

So, if you have CPU Ryzen installed on your board, and you encounter a clock watchdog timeout error in Windows 10,

I recommend to consider the following points.

On the second point: in a number of forums it is reported that, on the contrary, the error manifests itself after updating the BIOS, in this case a rollback to the previous version works.

Problems with BIOS (UEFI) and overclocking

If you recently changed the BIOS settings or performed the processor overclocking, this can cause the clock watchdog timeout. Try the following steps:

The next most common cause is the improper operation of the hardware or drivers.

If you have recently connected new hardware or have just reinstalled (upgraded version) of Windows 10, pay attention to the following methods:

One more thing concerning the equipment – in some cases (we are talking about PCs, not laptops), the problem may appear if there are two video cards on the computer (an integrated chip and a discrete video card).

In the BIOS on the PC, there is usually an item for disabling the integrated video (usually in the Integrated Peripherals section), try disconnecting.

Among other things, BSoD clock watchdog timeout can be caused by newly installed programs, especially those that work with Windows 10 at a low level or add their own system services:

Also, such software can include viruses and other malicious programs, and I recommend to check your computer for their presence.

Error CLOCK_WATCHDOG_TIMEOUT due to hardware problems

Finally, the cause of the error in question may be hardware and related problems. Some of them are easily corrected; they include:

More serious problems of this nature are faults in the motherboard or processor.

If none of the above has so far helped, the following points may be helpful:

I hope one of the ways will help solve the problem and in your case, the error is not caused by hardware problems.

For laptops or monoblocks with the original OS from the manufacturer, you can also try resetting to factory settings.