by Ron Bloom
in Chrome
0 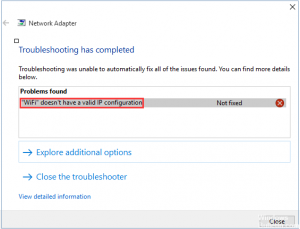 Today, one of the computers with Windows 10 that I have at home happened a connection problem, I mean there was no internet.

Coincidence or not, the problem on that affected computer happened exactly after a recent system update was installed, which we already know to be automatic.

I was curious that something like this happened because it was the only PC with that inconvenience because the other computers had a normal connection.

As well as the phones and tablets with which I count. In addition, the other computer (also with Windows 10) that received the same update had a normal connection.

What happened? Was the update that somehow affects certain teams?

Before continuing with the development of this publication, I would like to emphasize that more than a solution tutorial, it is a descriptive account of the problem that shows the situations I found and the various possible solution options I used to find the one that really fixed the problem.

Description of the problem

Let’s see a quick description of the inconvenience:

These are the 3 easiest descriptions to see at the moment; and by the way, the “Problem Solver” did not solve anything.

But it gave me a clue to locate a solution, so I set to work and see more technical aspects of the problem.

Looking for the solution

The message of the “Troubleshooter” is quite clear, the IP (private) that is being assigned to the computer is not correct, although it could also be some incorrect value in the subnet mask, gateway,

or DNS. To see what values were assigned to the team I ran in CMD:

And yes, everything was badly configured:

What happened? In a situation like that one might think that someone might have manually assigned this data in properties of the TCP / IPv4 protocol and that he did it wrong.

But no, the configuration that I have and that I reviewed is in automatic; that is.

it is the modem/router that assigns these values, both the private IP of the equipment and the DNS server address.

Also, as I said, that problem arose just after the Windows update, because before that I had an Internet connection.

The next thing was to check the modem/router and see what IP was assigned to that computer, and I could verify that everything was correct.

The modem was recognizing the name of the equipment and sending it a suitable IP.

Is it a driver problem? Because of the way the problem arose, I doubt it.

The device manager said that everything was fine with the network card and that it even had the most updated driver.

Also, reinstalling the network driver would not be my first choice at this time; there were other options to review before.

There are 3 very used commands that usually help to restore the correct values shown in ipconfig, and they were my first option (executed in CMD in that order):

The first two commands were executed well, but the last ipconfig -renew was delayed more than the account just to say that the DHCP server could not be reached and the timeout was over.

Well, it is clear that it is the PC that can not contact the modem/router (who through its DHCP server assigns the IPs to the network equipment) and not vice versa.

Because I already mentioned that the modem is assigning a correct IP ; What’s more, through the configuration of the modem I assigned another static private IP to that computer, but still nothing happened.

It was time to try another option, this time exclusively from the Windows side: Reset the system connection sockets.

First I removed the network cable from the PC in order to avoid any communication (even if it is bad) between the modem and the affected equipment.

Then I opened a CMD console as administrator and executed:

This command restarts the Winsock catalog to its default configuration.

Note: Winsock libraries are responsible for providing all TCP / IP services to the programs that need them, allowing the system to access network services.

The above command will ask to restart the computer. After the restart, I connected the network cable and Oh surprise! I already had an internet connection.

I tried to reveal everything about ethernet doesn’t have a valid ip configuration in this article.

And I hope it will help those who present the same problem; However, in case that when restarting winsock continue with the problem.

You could also try restarting the TCP / IP protocol to its original state, for that we would execute the following command in CMD as administrator:

Let us know if anything has helped you, or if you have other ideas in the comment below.

Click Here To Learn What Is 404 Error On Chrome?

Tags: Ethernet does not have a valid IP configuration

How To Delete A Page in Google Docs [Quick Guide]

How to fix NET:: ERR_CERT_DATE_INVALID Your Connection Is Not Secure Error?

How To Fix ERR_SSL_PROTOCOL_ERROR Localhost In Google Chrome