Trackball mice were in trend a few years ago, but gradually they lost their popularity as laser mice came into existence. The regular users never appreciated trackball mice because even I feel that those were way more than mice, and a regular user always needs something compact and limited. But the relationship of gamers and trackball mice became so strong with the time that even these days, some gamers prefer traditional trackball mouse over the advanced and so-called precise modern mice.

What I love the most about trackball mice is that with just a single finger movement, you can hover on the entire screen. Whereas in-case of laser mice, you have to move your hand.

Trackball mice have several other features that none of the regular mice has. Still, due to their bulky design, users use them to avoid them. But companies like Logitech and other mice manufacturers changed the design of trackball mice, and those new mice got a lot of appreciation. Some of them started considering those as the best gaming mouse with trackball.

Why should you use a gaming mouse with trackball?

I’m not over exaggerating the trackball mice, it’s a fact that a gaming mouse with trackball always has more features than a basic gaming mouse. Advantages of a trackball gaming compared to a mouse are listed below:

These features can actually have a positive impact on your gaming performance. With a trackball you take away pressure on your wrists, arms, shoulders and neck. This gives you better control, more speed while using less energy. You won’t get sore wrists or arms after a long night of gaming.Whereas if you’re struggling with your Aiming, it is recommended to at least use a gaming mouse with trackball. You will notice the difference.

Logitech is known for its best in class mice, here Logitech MX Ergo is also the best in the category of trackball mice. It is because this mouse gives you the option to adjust the angle of the trackball that is placed on the left side of the mice. 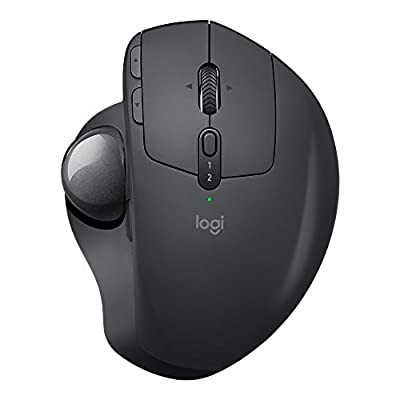 If you continuously play games for hours, then Logitech MX Ergo is the best option for you. Its ergonomic design is known to eliminate muscle strain of the hand. In terms of battery, Logitech MX Ergo mice have no competition. It contains a rechargeable battery that will last for 70 days on a single charge.

Logitech MX Ergo mouse has two major features. The first one is its trackball position. The trackball is placed under your thumb, and rest all the buttons are at their native place. Whereas the second is that you can customize the trackball alignment from an angle of 0 to 20. Users have reported that their precision has increased with the trackball’s customized angle, and the mouse feels more comfortable than with default settings.

Another Logitech mouse in the list, it is placed here because of its traditional look and retro vibes. Here in Logitech Trackman Marble trackball mouse, the trackball is located at the top center of the mouse, which comes very handy while scrolling. Unlike Logitech MX Ergo, it is not a wireless mouse. It has USB connectivity. 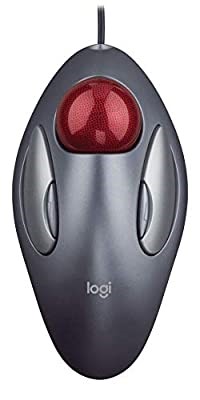 Logitech Trackman Marble mouse has four programmable buttons that allow you to program the buttons as per your game. This mouse is designed in a way to reduce the stress on your palm during long hours of gaming.

You don’t have to worry about charging your device or setting it up. You just have to plug in and enjoy gaming with a whole new experience.

Kensington Orbit Trackball Mouse is the best-looking trackball mouse available in the market right now, thanks to its scroll ring. Besides appearance, Kensington trackball is quite good at accuracy and scrolling. 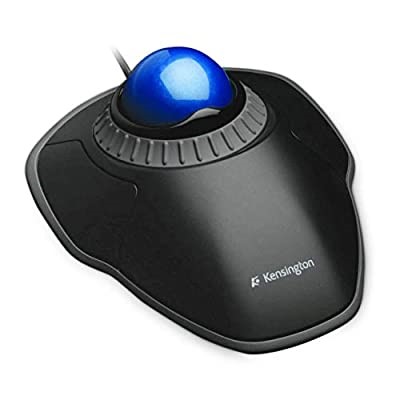 If you are looking for a modern looking mice with a traditional touch then Kensington Orbit is the best available option for you. This mouse doesn’t need any so-called maintenance, thanks to the optical technology used in it.

Kensington Orbit Trackball mouse has USB connectivity; thus, again, you are saved from the hustle. Simply just plug in and enjoy your gaming. This mouse has two customizable buttons and its design will no doubt be quite attractive and efficient.

If you are looking for a hybrid mouse with features of both modern laser mouses and trackball functionality, then Elecom M-HT1URBK mouse is for you. This mouse has a total of eight buttons, and you can program all of them as per your game. These programmable buttons will definitely give you an upper hand against your opponent in gaming. 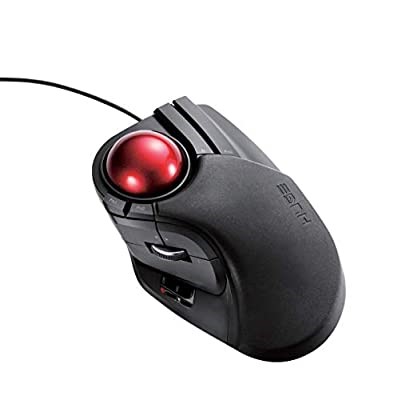 In real-time strategy games, these programmable buttons can help you stay two steps ahead from all your opponents, until and unless they are also using the same mice.

The USB connectivity again saves you from all the hustle, this mouse has three different DPI options, and you can choose any one from 500,1000, and 1500 DPI. Its wide DPI range makes it a highly responsive mouse.

Trackball of Elecom M-HT1URBK is placed on the mouse’s slightly left side, and it is easily accessible with a finger. Overall it is a power-packed mouse.

Which trackball mouse is best among all?

For me, Logitech MX Ergo trackball mouse is the best gaming mouse with trackball. It is everything that you need to enhance your gaming experience. Its ergonomic design will eliminate the muscle stress during long gaming hours, and its trackball is placed under your thumb that gives a broad reach to this mouse. The four programmable buttons offer everything that is left.

Why Should I prefer trackball mice over others?

No doubt, laser mice are quite efficient and compact, but while gaming, you need something comfortable yet highly precise, and there is hardly any laser mouse that can offer these to you. However, every trackball mouse can fulfill these two requirements. Besides this, trackball mice are designed to reduce muscle strain during long hours of usage.

Why are trackball mouse the best?

Trackball mice are mostly used for gaming, but besides gaming, these mice are also preferred for graphics designing and planning related work.

Trackball mice are known for their precise performance, and if you are struggling with your precision in gaming, you must try one of the mice mentioned above. All of these mice are strictly picked on the basis of following parameters:

While picking these mice, I have also considered the reviews of its users. Thus, there is minimal possibility of getting disappointed with these mice. Rest, feel free to ask your queries.

How to connect Clash Royale from android to iPhone without old device?

How to Choose a Printer for Your Home or Office

How to Choose a Budget Gaming Keyboard