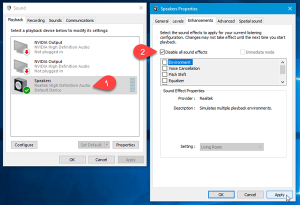 Audiodg.exe is the audio component for Windows (Vista, 7, 8 and 10). Inside your Windows Task Manager, it is represented as an ‘Audio Device Graph Isolation’.

The process enables your PC audio driver to run under a separate session as the user is currently logged in and is the audio engine for Windows.

This prevents other software applications from modifying or changing and content or plug-in enhancements.

It is a part of the Windows file system. It is not responsible for causing errors.[1].

In other cases, it is noted as a virus, trojan or worm.

The main reason behind that is the spyware applications or different antivirus programs scans the original file as a virus.[2] Originally it was called the process DeviceGraph.exe.

For different reasons that are no longer relevant people though that they need to limit their binary numbers.

So after it was named as audiodg (Audio Device Graph), people thought it was more redundant but it was settled.

[3] There are many fixes present for the audiodg.exe but we are going to discuss the most common ones.

The audiodg.exe is a part of the Windows file system, but sometimes spyware, virus or trojan gets into the system replacing the original file and causes the problems. There are many application errors that are caused by audiodg.exe.

Following are the common error messages which can occur more often:

There are many reasons for high disk usage or CPU usage. It could be through heavy processing, rendering, etc.

In the case of audiodg.exe, many people have noted high disk usage in the task manager or even the lagging in the system due to the high consumption of resources.

The reason behind that could be the audio process by the original audiodg.exe or there is some virus or spyware which is named audiodg.exe.

Another possibility is that there are certain audio effects when enabled push this process or the sound driver is not updated or the drivers which are needed by the gaming devices might not be updated.

[4] There are many ways to fix the problem, the following are the common fixes for the high disk usage on hxtsr.exe.

Sometimes due to high audio usage, the CPU processing increases. There are many ways to disable audiodg.exe.

Following is the step by step guide on how to disable/remove it completely from the system:

Step by Step Guide to Resolve the audiodg.exe error

Many solutions/fixes are available which help resolve the errors caused by audiodg.exe. Following are the most common fixes which are used to resolve this issue.

If this didn’t work, update the generic audio driver that came with Windows.

Some Skype users have reported that this worked for them. Maybe it would work for you too.[5]

You can also adjust the audio sample rate if none of these fixes work for you. It can be done in the device manager in audio devices.