Laptop Plugged In Not Charging Windows 10 [For Most Laptops] 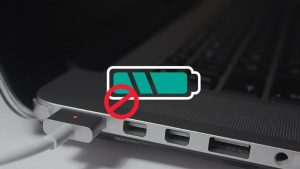 Laptop Plugged In Not Charging Is a common issue.

You are using your laptop, and suddenly you discover that there is a strange message in the taskbar, specifically in the battery icon.

You would swear to see that the laptop is not charging while plugged in with an active power outlet, but it is losing charge, what is happening to the battery of your laptop?
Most likely, this is not in its final moments of life, but in many laptops, it is a system that incorporates your laptop to extend the life of the battery. We will go step by step trying to reveal what happens to your laptop.

Why Is My Laptop Plugged In Not Charging Windows 10 ?

A laptop is designed to be mobile. Its components are firmly integrated with each other and are designed to use a minimum amount of energy and produce as little heat as possible. Improving the portability of a laptop undermines its durability.

A laptop computer must face a greater number of threats and dangers compared to those exposed to a desktop computer. When a laptop no longer charging despite being connected, there are a number of components that can be the cause of the failure.
Before entering into solutions and tricks, it is important to know that the life of the batteries is finite. That is, it’s over.

Laptop Plugged In Not Charging Error

Every battery is capable of being fully charged and discharged a limited number of times, and once it has been reached, even though we have been the most careful in the world, it will stop working.

This being inevitable if we can work to cover the maximum number of possible completed cycles. Misuse will reduce the number of the same issue that no one likes.

The first thing to check if it seems that the laptop is not charging or does not turn on is if the computer is actually receiving power. It starts with the electrical outlet, although it can be a no-brainer, many apparently difficult computer problems have a simple solution.
Connect a work lamp, or other devices that you know works properly in the electrical outlet to test it.

Alternatively, insert the laptop’s connector into a different outlet and try again. Most notebook AC adapters have a small green LED light on the unit when it is receiving power. If the light is off and the electrical outlet is working, this indicates that the adapter is in poor condition.

Software To Improve Your Battery Life

It has software that helps take care of your battery

The first thing we must do is check if your laptop has battery conservation software, with this type of applications the computers would stop charging the batteries once they reached 100% of their load. The manufacturers claim that this can increase the life expectancy of the batteries.


Some manufacturers make the battery stop charging at 95%, and others allow us to select if we want the load to remain between 50% and 60%. To know if we have it we just have to look into the battery settings of your laptop with Windows 10.

Acer Laptop Plugged in But Not Charging

The drivers may be the problem in windows computer

If ever your Windows 8/10 computer has stopped charging despite being connected correctly you are not alone, and it is a common problem especially after updating the system.

“Connected but not charging” in Windows 8/10 laptops do not be alarmed, it is a common problem that in most cases has a solution.

It is common for a Windows computer to stop charging while plugged in and detecting that it is correctly connected to the cable, especially after updating the system.

Fortunately, it has a solution:

You can access ‘device management’ by looking for it directly in the start menu.

Click with the right side of the mouse on each of the elements and choose the option ‘Uninstall the device.’ Do not worry; they will be reinstalled when you restart the computer.

Try Turning The Computer Off & On Again

Once uninstalled, turn off the computer and unplug the cable. If you can, take the battery out of the computer; In case it is not removable you can try to do it without removing it.

Re-insert the battery in case you removed it, plug in the computer and turn it on. It should be loaded again.

If you do not remove the battery, it may not work; in that case, you would have to disassemble the computer to remove it.

The battery is not calibrated

Another option that most reproduce when these types of failures happen is that the battery is not properly calibrated.

When this happens, Windows and the battery are not understood correctly, and the operating system can understand that the battery still lacks charge even being at 100%. So to rule out that this does not happen, you must re-calibrate your battery.

There is a problem with the power adapter

That this message appears on your laptop may be because the power adapter is not providing the necessary power to your laptop.

Check that the different connections on the adapter are well made and that none are causing problems, including the one that connects directly to the laptop. Another option is to try a compatible adapter that you have at home.

Less common, but still a possibility is that the motherboard or battery does not work. A battery in poor condition can sometimes prevent the laptop from turning on or charging.

Remove the battery and reconnect the laptop to the electrical outlet to see if the battery was causing the problem.

If the motherboard is in poor condition, possibly due to a significant voltage surge, it will cause the equipment not to start or charge.
There is no definitive home test for a defective motherboard other than the removal process. If no other component can be isolated as the problem, then it is likely that the problem is the motherboard.

Behind Repair – Buy A New Battery

If none of these steps have worked for you, your battery may be reaching the end of its life cycle.

We hope that these checks have worked for you to see what the problem was with your laptop’s battery.

There Was An Error Connecting To The Apple id Server

How To Build Your Own Laptop From Scratch [Using Good Components]

How Do I Fix Wifi Authentication Error Occurred [FIXED]